ININ Games is known for bringing plenty of classic video games back to life on modern consoles with their reboots and remakes. This time around, ININ Games has teamed up with BEEP to release the iconic side-scrolling shooter Cotton Reboot! One of the best aspects of the new Cotton Reboot! is that it also includes the original classic Cotton title inside the game which allows the players to not only experience just the reboot of the title but also the original version of the game with its own unique challenges and art style as well. This is our review of Cotton Reboot! in which we try out this amazing classic title brought back to life for modern consoles.

The story of Cotton Reboot! is told in the form of small cutscenes in the middle of levels which mostly comprises of a dialogue between the little witch Cotton and her fairy friend. The story of the game begins with Cotton, the little witch who is out looking for her favorite candy. She comes across the small magical fairy called Silk who asks for her help and in return tells her that Cotton could end up being the ruler of the entire world if she defeats the evil beings. At this point, you come into play as the game begins with Cotton jumping on her broom and starts her journey. 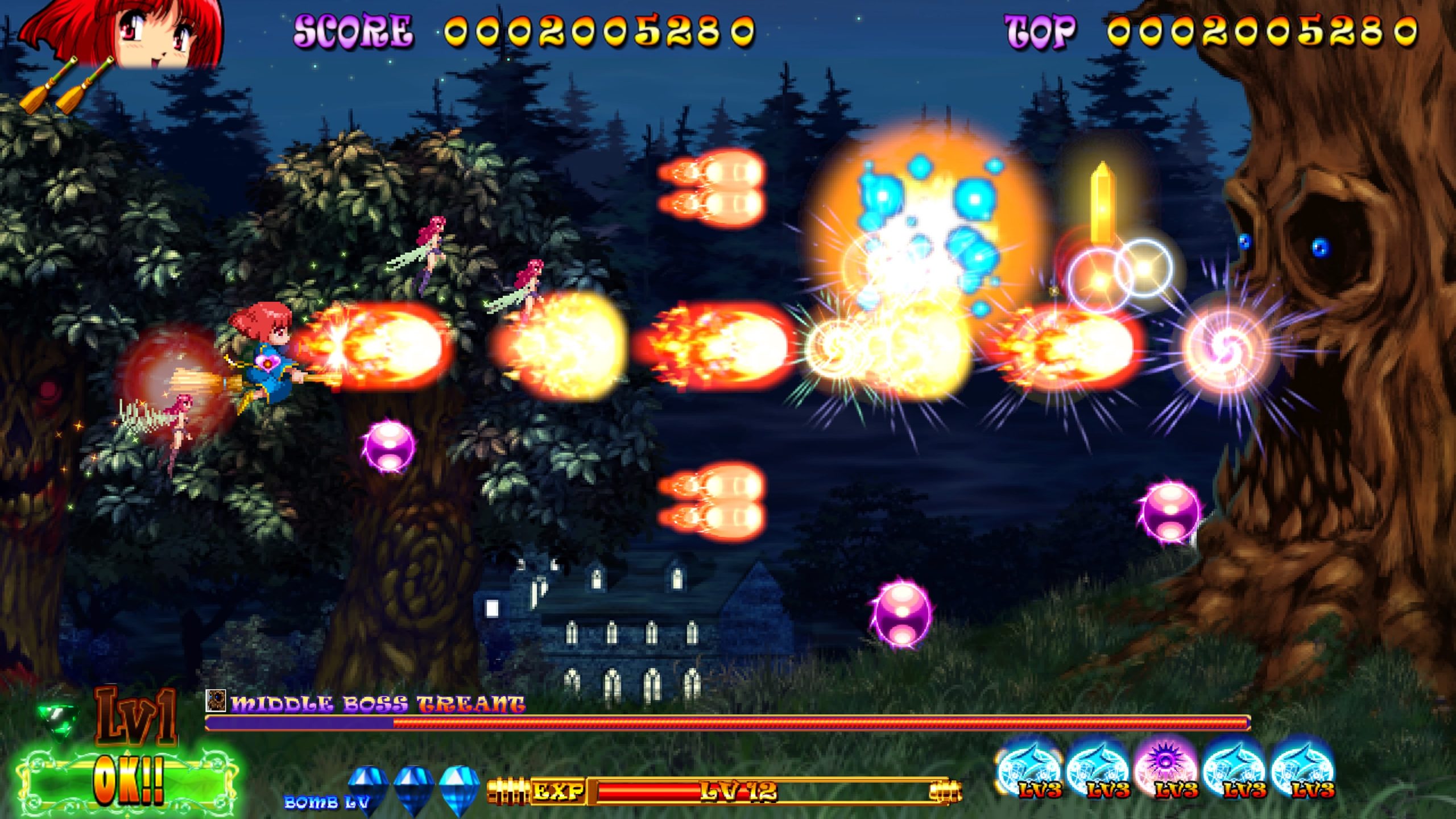 Gameplay is where Cotton Reboot! really shines. Staying true to the core formula of side-scrolling shooters, enemies come at you in large numbers from the right side of the screen, and you are placed on the left side of the screen. Silk also aids you in battle as she fights the enemies as well. If you manage to free up additional fairies, you can have a maximum of 6 fairies at the same time assisting you in battle however if you die, one of your fairies is also lost. The last fairy, Silk, always remains at your side even if you keep dying with just her left by your side.

Your main attack includes bombs and shots fired at your enemies. The bombs take care of enemies below you while the shots fired on the right side will kill enemies spawning on the screen. You have to be constantly on the move to survive in the game as enemies spawn from literally everywhere. Some will spawn from the top, some from the bottom, and some sneaky ones will also spawn from your back and come at you when you are least expecting them. Each of the enemies that you kill in the game leaves behind crystals that play an important role for you in the game. 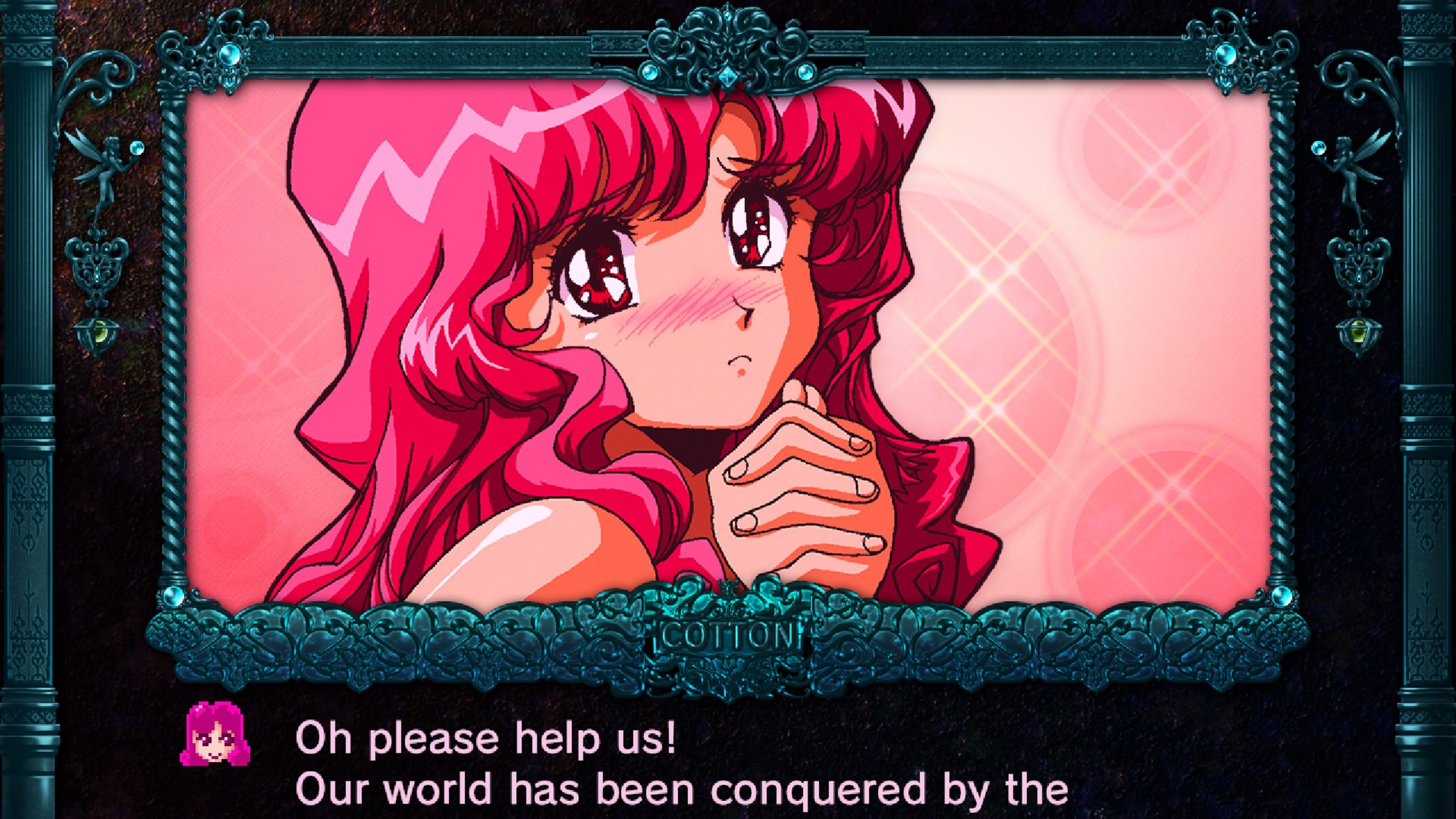 These crystals not only power up your main weapons but also grant you magic powers that you can use in the game to annihilate enemies in a single, massive attack. To power-up, you need to collect these crystals however these crystals can also be shot to power them up. Every time you shoot these crystals, they change their color. Orange and yellow give you experience that will allow you to level up and then it powers up your weapons. If you keep shooting these crystals, they also eventually change colors to either blue, green, purple, or red.

These are your magical powers and the more colored crystals you collect, the more that particular magic becomes powerful. Each magical power can be powered up to three times and every level makes these attacks more powerful. This does not limit you to keep them saved for boss battles because as far as I can remember, I kept using these magic powers during normal enemy encounters as well and as far as I kept collecting these crystals, I had Level 3 magic attacks ready for the boss encounters. There is no way to switch between your magic attacks so the one highlighted at the bottom-right of the screen is always selected for you. 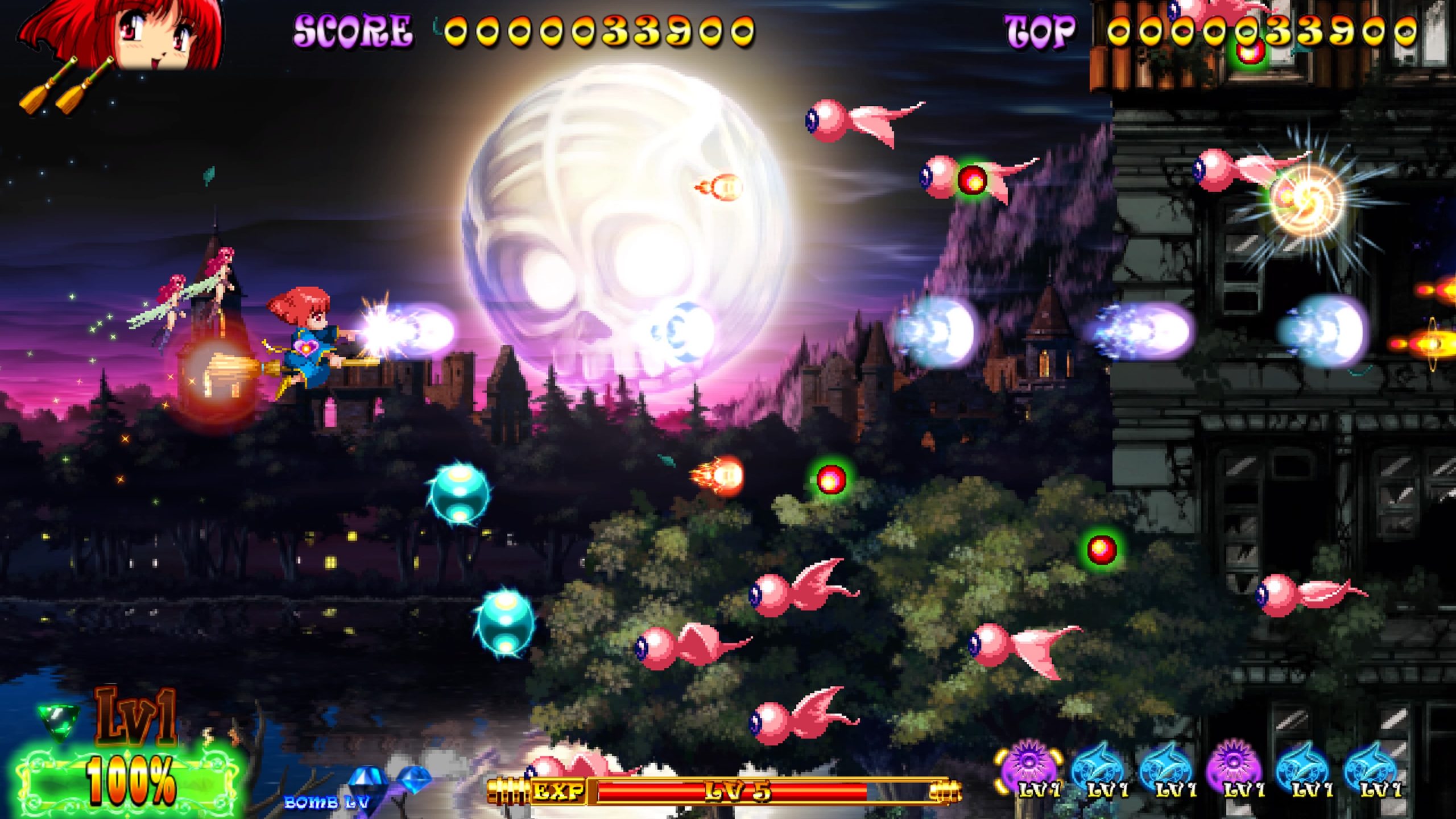 I also really liked the enemy design as they are nothing of the sorts that would find them in normal side-scrollers. By looking at the enemies, you cannot really tell what theme they follow as each level offers a different enemy type and each one has its own unique attack pattern. As you progress in the game, enemies also start to become more ruthless and deadly. Sometimes, you will need to resort to your magical attacks to clear the screen. There are four different types of Magic attacks in the game. You have the Red Fire Dragon, Green Summon, Blue Lightning and finally, you have the Purple Bomber. Each of these magic attacks come with their attack styles and perks. You can mix and match to land deadly attacks when you need them the most. To further cater to the difficulty of the game, you can adjust the difficulty level of the game as well.

At the end of each level, you get a bonus round of sorts where Cotton says Tea Time and then small bonus packets start falling from the sky. If you want to add some bonus points to your high score, you can try to catch as many of these packets as possible. Since they are falling pretty quickly, you only end up catching a small few of them because the level officially ends, and you can view your performance in the game. Cotton Reboot! also features a dedicated Ranking section where you can view highscores for all difficulty levels when compared with your friends and also online players. 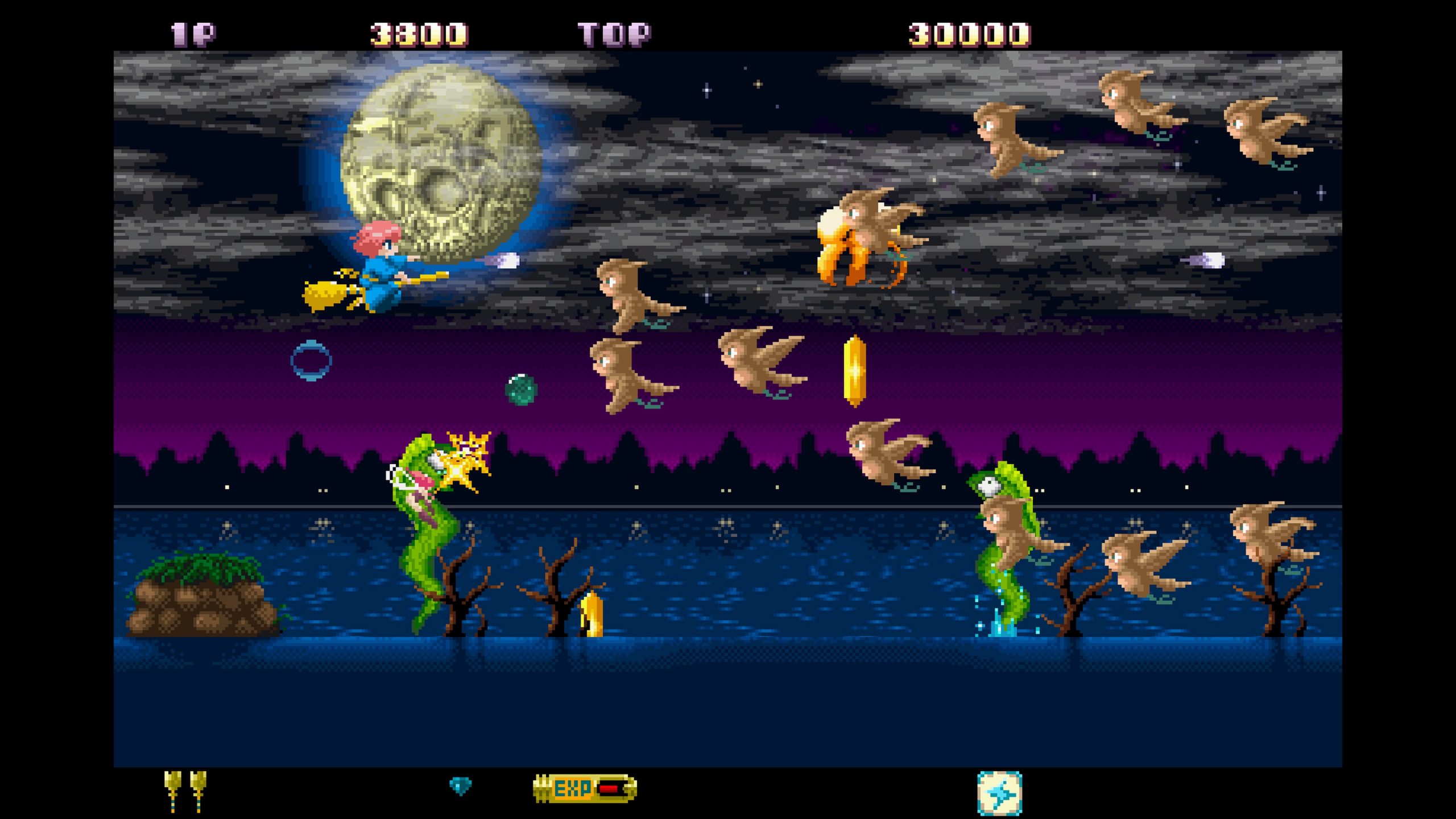 Overall, Cotton Reboot! is a great port and it solidly expands the classic, side-scrolling shooter in every aspect. There is a classic mode for the lovers of classic titles while a modern mode ensures that new gamers can slide into the classic side-scrolling genre much more conveniently as well before trying out the classic mode of the title. The visuals look great, the screens are always full of action and the boss battles demand pixel-perfect precision. Everything combines together to deliver a really good side-scrolling experience. In my opinion, the only thing that does not really matter in the game if you follow it or not is the main story because it is there but literally has no impact on the gameplay experience whether you pay attention to it or not.

Cotton Reboot! is a brilliant return of the franchise to modern consoles. It not only features the modern rebuilt of the classic title but also includes the original title in the game itself as a mode that allows you to experience the original title in its full glory as well. It packs enough unique mechanics and gameplay elements to set itself apart from the rest of the titles in the genre as well. The game looks really pretty and by comparison with the original game, you can easily see how the developers have worked towards making the game fit for a modern audience. If you love challenging pixel-perfect side-scrolling games and want to try a game with a blend of both modern and classic mechanics, you should definitely give Cotton Reboot! a shot.

The post Review: Cotton Reboot! – A Perfect Reboot of a Classic Franchise appeared first on GamesHedge.